The Pros and Cons of Abortion 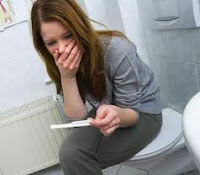 We recently discovered that my 16-year-old daughter is pregnant. This has been a real shock for us. The alleged father no longer lives in our hometown and is supposedly a heavy pot smoker. My daughter has talked about having an abortion, but both she and I are torn on this issue. I know this is a touchy subject, but I am asking for your advice on which way to go with this decision. Thank you!

My conviction is very much against abortion, but you’re not asking for my opinion. I‘m assuming you want the facts in order to make an educated decision.

Facing an unplanned pregnancy can be very difficult and scary for an adolescent, and deciding what to do will be even harder. No matter what her political or religious persuasion, it always comes down to a very intimate, personal decision that no adolescent makes without some degree of emotional trauma. All of the options: abortion, or raising the baby, or allowing another individual to adopt the baby carries emotional pain and personal sacrifice.

In the U.S., teenage abortion accounts for 19% of all procedures of this nature. The average age of those receiving abortions is dropping from 19 to 17. Over 50% of abortions performed annually are on women under the age of 25 with the ages of 18 and 19 accounting for the highest number performed.

• are at higher risk for post-abortion infections such as pelvic inflammatory disease (PID) and endometritis (inflammation of the uterus), which may be caused either by the spread of an undiagnosed sexually transmitted disease into the uterus during the abortion, or by micro-organisms on the surgical instruments which are inserted into the uterus

• who abort are 2 to 4 times more likely to commit suicide than adults who abort, and a history of abortion is likely to be associated with adolescent suicidal thinking

• who abort are more likely to develop psychological problems, and are nearly three times more likely to be admitted to mental health hospitals than adolescents in general

The most common reasons an adolescent chooses abortion are:

Medical conditions and indications may develop after the first trimester (12 weeks) of pregnancy that could threaten the mother's life and/or health. Late-occurring medical conditions can include:

Some of the consequences of 'compulsory pregnancy' or 'forced motherhood' (i.e., unwanted children) are as follows. The child:

Some of the disadvantages of going through with an abortion are:

• creates feelings of regret and grief
• does not give the child that is in the womb a chance at life, thus it is looked down upon by many religions
• having an abortion always lessens your chances for having children later in life
• adolescents who have participated in abortion repeatedly report feeling deceived by those selling abortions and become preoccupied with concern for 'God's judgment and punishment'
• the "would-be-mother" will always wonder 'what if' and may feel some level of guilt for the rest of her life about the child she could have had

• Abortion is final; you can't go back on your decision
• You may feel guilt and shame about your choice
• You will miss the opportunity to see your child develop
• You will remember taking a life
• Your pregnancy ends with death

Adolescents are more likely to make a snap judgment and try to cover up their pregnancy from their parents by having an abortion. Adolescents are also more likely to report having wanted to keep the baby, higher levels of feeling misinformed in pre-abortion counseling, less satisfaction with abortion services and greater post-abortion stress. Adolescents were also more likely to use immature coping strategies such as projection of their problems on to others, denial, or "acting out", than older women, strategies researchers speculate might become permanent.

Despite the fact that supporters without parental consent continually leave the spiritual devastation component out of the discussions, teen abortion facts tell us that adolescents who have participated in abortion repeatedly feel deceived by those selling abortions and become preoccupied with concern for God's judgment and punishment.

Teen abortion is an especially difficult thing to deal with, especially when having to possibly confront your parents and hoping that your partner will be supportive.

Adolescents are encouraged to involve parents in their decision to have an abortion, and most do have a parent involved. In most of these states, if she can't talk with her parents - or chooses not to - she can appear before a judge. The judge will consider whether she's mature enough to decide on her own. If not, the judge will decide whether an abortion is in the teen's best interests. In any case, if there are complications during the procedure, parents of minors may be notified.

Before an adolescent makes decisions in haste, or as an attempt to undo a wrong, adolescents and parents on both sides of the parental consent debate should get the teen abortion facts and found out as much about abortion and post-abortion procedure complications. The most important thing to remember is that you do have a choice. There are three main paths: parenting, abortion or adoption.