Control versus Guidance: Tips for Parents of Defiant Teens 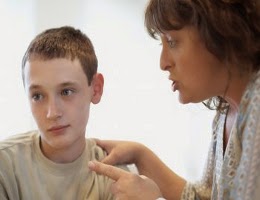 Boundaries are the lines you can draw in the sand. The purpose of boundaries is to keep your son or daughter safe. They are not used to control your youngster into being a different person, to have a different attitude, to change their style of expression. Boundaries are for safety and guidance.

If you are reading this blog post and have a situation with a defiant teenager, then it is already likely you have fallen into the trap of exercising too much control over your teen to change who he or she is. Excessive control will always lead to excessive playing-out of the youngster trying to break free from it. PERIOD! This is a “lose-lose” situation. However, you must have boundaries set to protect your children, obviously.

And that was my Cardinal sin list. I could have made a thousand sins on that list, but then I would be leaning more towards control than guidance.

Cardinal sins were enforced by me saying this: “Children I love you, and I am your father. It’s my job to keep you safe. Rules are rules, and everyone makes a mistake once in a while breaking a rule. But Cardinal sins can never be broken. If you do, you will lose everything you have that I have given you. Cell phones, televisions, music, toys, hobbies -- everything is gone. It may be for a month, a year, it may be two years, or it may be forever. If you break a cardinal rule, your life as you know it today is over.”

I made sure I got this point across by telling them several times in their lives.

Use cardinal rules to set your boundaries. Everything else that you want to control about your teen’s life you need to evaluate whether it is because the thing is harmful to him or her, or just something that you do not like. If you have been overbearing with your control over your child's life, you have created a time bomb that will explode to the determent of both of you. The good news is that now you have a lot of low hanging fruit: releasing control, but keeping your boundaries. Your teenager will have a huge sigh of healthy relief – and so will you.

The parents’ job is not to change the personality of their child, as much as we are all driven to do so. Control will never change who they are. Being an example to them will always affect them. Empowering them to have self-control by being given more freedom, with naturally occurring consequences, will give them self-control. But overbearing parental control will not – ever!