Does divorce "cause" defiant behavior in kids and teens?

“My 14 y.o. son’s behavior has taken a major turn for the worse. My husband and I have recently separated and are making plans to divorce. Could there be a connection between my son’s erratic behavior and the fact that his dad has left?” 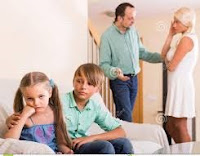 The inter-parental conflicts surrounding divorce have been associated with defiant behavior in teenagers affected by the break-up. However, although some single parents and their kids become chronically depressed and report increased stress levels after separation, others do relatively well.

For some single parents, the events surrounding separation and divorce set off a period of increased depression and irritability which leads to loss of support and friendship, setting in place the risk of more irritability, ineffective discipline, and poor problem-solving outcomes. The ineffective problem solving can result in more depression, while the increase in irritable behavior may simultaneously lead the teen to become rebellious and antisocial.

Studies into the effects of parental separation and divorce on child-behavior have revealed that the intensity of conflict and discord between the parents - rather than divorce itself - is THE significant factor. Kids and teens of divorced parents whose homes are free from conflict have been found to be less likely to have problems than kids whose parents remained together, but engaged in a great deal of conflict, or those who continued to have conflict after divorce.

In addition to the effect of marital conflict on the teenager, conflict can also influence parenting behaviors. Marital conflict has been associated with inconsistent parenting, higher levels of punishment with a concurrent reduction in reasoning and rewards, as well as with moms and dads taking a negative perception of their teen’s adjustment.

As a side note, research has suggested that parents of kids with behavior problems frequently lack several important parenting skills. Parents have been reported to be more critical in their use of discipline, more inconsistent, erratic, and permissive, less likely to monitor their kids, as well as more likely to punish pro-social behaviors and to reinforce negative behaviors.

A coercive process is set in motion during which the child or teenager escapes or avoids being criticized by his or her parents through producing an increased number of negative behaviors. These behaviors lead to increasingly aversive parental reactions which serve to reinforce the negative behaviors.

Differences in affect have also been noted in defiant kids. In general, their affect is less positive, they appear to be depressed, and are less reinforcing to their parents. These attributes can set the scene for the cycle of aversive interactions between parents and kids.