Children Who Abuse Their Pets 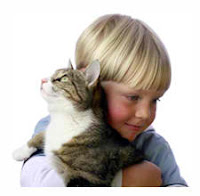 Child and teen motivations for the abuse of pets have not been studied extensively. However, case reports and a child interview study (using the Cruelty to Animals Assessment Instrument) suggest a number of developmentally related motivations.

Why Children and Teens Abuse Pets—

Research on the abuse of pets reveals the following:

Here are some “red-flag” behaviors that a youngster may exhibit towards a pet:

Once detected, it is advisable that moms and dads step-in and immediately correct the behavior before it worsens.

What Parents Can Do About the Abuse of Pets—

One of the most powerful tools we have for preventing cruelty to pets is education. It is important to plant the seeds of kindness in kids early, and to nurture their development as the youngster grows. Kids not only need to learn what they shouldn't do, but also what they can do. When kids see that their pets are happy and loving, it will make the youngster feel good, too. This in turn will help the kids care for their pets' feelings.

Kids need proper education, too. Please urge your local schools to integrate humane education into their curricula. To help you, your local shelter may have outreach programs, education materials, camps, etc.

Every youngster is unique, and grown-ups should use caution and careful thought when discussing cruelty with kids. In general, kids under the age of four simply should not be exposed to cruelty. Two-year-olds can begin to learn that their actions make others (including pets) happy and sad. With two- and three-year-olds, discuss their own experiences and how they would feel if they were treated the way they treat their pets or other pets in their immediate lives. Help them relate not only the ways they would feel hurt, but also the ways they would feel happy.

With all kids under six or so, you may wish to help guide their hands so they can learn how to pet and hold their animal companions. Kids do not have fine control over their movements and impulses—they will want to treat their pets with love, but will need a little help from you to do it correctly.

Kids who are between about four and six often begin to understand basic moral concepts, such as fairness. These kids can learn to be kind to pets because the pets "deserve" it. Kids may discuss injuries they have had themselves, but do not introduce discussions about other types of injuries. Try to limit discussions of animal cruelty to the simple fact that pets can be hurt; do not describe how they can be hurt (e.g., starvation, physical abuse, etc.).

With most kids who are six to ten years old, you can begin to discuss why someone might be mean to an animal (as long as you make sure the youngster always keeps in mind that it is wrong to hurt pets). In addition, do not let discussions of animal cruelty satisfy the morbid curiosity some kids of this age may have. Kids of this age often form some of their earliest memories and impressions about the state of the world beyond their families. It is very important that grown-ups filter what these kids perceive! Even if kids witness violence as a "bad example" or as a way NOT to act, they are still witnessing violence, and can be strongly affected by it.

Many kids between 10 and 14 are exploring their self-image and reflecting upon their relationships with others. Studies indicate that kids of this age are still strongly affected by violence, so discussions about animal cruelty should still be kept free of details about the violence. Nonetheless, the issue can be raised directly—if delicately—with most of these kids. Grown-ups should make it clear that they do not condone violence in their own thoughts and behavior. Kids of this age are finely attuned to the words and actions of adults, and still rely on them as role models.

Moms and dads, educators, and trusted adults can also discuss with 10- to 14-year-olds how they would act if their peers or friends treated pets cruelly. By couching the advice in terms of what you would do if you were in a given situation, you can help kids overcome peer pressure and follow what they know is right. These kids may encounter others abusing pets—knowing that they are in the right and will be supported for standing up to it is very important at this age of strong peer pressure.

Again, with all kids – even older teens – keep in mind the importance of modeling appropriate behaviors. Our kids do emulate us, even if they wouldn't admit it. If we treat pets cruelly or as unfeeling machines, our kids will probably think that this is right or, at least, normal. The more a youngster identifies with an adult, the greater an impact that person will have on the youngster-in both good ways and bad ways.

Kids who know of animal cruelty should tell a grown-up about it. Make sure kids know who they can trust—such as moms and dads, educators, police, etc.—and nurture their trust so they can tell you.

It's vital that children who hurt pets receive intervention — including counseling and a ban on contact with animals — to prevent their violence from continuing. It's also crucial that animal guardians protect their dogs and cats from abuse and other dangers by keeping them indoors and never leaving them outdoors unattended.

Although vandalism may represent costly and psychologically significant destructiveness, smashed windshields and graffitied walls do not feel pain or cry out when they are damaged. Pets, however, do express their distress when they have been abused, and their distress calls out for attention. This article has provided an overview of the under-reported and under-studied phenomenon of pet abuse in childhood and adolescence. Addressing cruelty to animals as a significant form of aggressive and antisocial behavior may add one more piece to the puzzle of understanding and preventing youth violence.

==> Help for Abusive Children and Teens

I think the instances of animal cruelty are extremely common. People regularly post pictures on social media of babies and toddlers abusing pets as 'cute' - and this is even shown in the tv shows exhibiting family's personal 'funny moments'.
Children with neurological disorders do 'take it out' on pets and I feel that with the right direction this may not in most cases indicate future abuse as long as this is dealt with sensitively and promptly, and not allowed. It's easy to fear the worst but with good guidance we hope to achieve a positive outcome.