Does your child have ADHD? 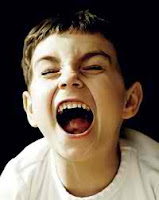 2. Can my youngster stick to activities, or is the house littered with a trail of unfinished games and projects? Kids with ADHD often lose interest in an activity in five minutes or less. They go from one activity to another. You may ask your youngster many times to clean up, but he/she will not even be able to focus long enough to do that!

3. Has disciplining my youngster worked? Moms and dads of ADHD kids usually have "tried everything" …from ignoring their youngster's misbehavior …to "time-outs" …to spanking – but nothing seems to work.

4. How long has my youngster been too active? Hyperactive ADHD kids have had problems with hyperactive, impulsive behavior since before age six. Mothers of ADHD kids sometimes even remember that their baby was hyperactive in the womb. Also, kids with ADHD are often described by their moms and dads as being fussy and difficult to quiet in infancy. Sustained restlessness, even when eating or at bedtime, is characteristic of these kids.

5. Is my youngster's restlessness and impulsivity a problem in several different settings? ADHD is less likely to be present if your youngster only shows behavioral problems at home, but not in other places (e.g., school, grocery store, etc.). ADHD problems often become worse in settings where there is more activity and noise.

6. My youngster can watch cartoons on television for a long time. Does this rule out ADHD? Kids with ADHD are often able to keep their attention on the fast-paced world of cartoons and video games. If your youngster's attention stays glued to the screen for programs such as cartoons, suspect ADHD. Often, such kids will keep their eyes on the screen, but will be constantly fidgeting their legs and arms.

7. When my youngster is misbehaving, is he off in a world of his own or is he looking over his shoulder to see if I'm watching him? Kids with ADHD can’t control at least some of their hyperactive, impulsive behavior. Suspect ADHD if your youngster appears "off in a world of his own" and does not respond to you when, for example, he is climbing on a table, jumping on the sofa or misbehaving in some other way. Kids who misbehave on purpose often will look over their shoulders to see how grown-ups react to their misbehavior. You can tell by the look on your youngster's face.

It might be hard for your doctor to tell if your youngster has ADHD, particularly if he is not hyperactive. For this reason, the doctor may want you and your youngster to see someone who has a great deal of experience working with ADD/ADHD (since there are many conditions that can look like ADD/ADHD). Many kids with ADHD aren't hyperactive, and those who are may not be hyperactive in the doctor's office. Information about your youngster's behavior needs to be collected from different people who know him/her, including your youngster's teachers or anyone else who is familiar with his/her behavior.

Kids with attention-deficit hyperactivity disorder, or ADHD, may have signs of hyperactive behavior, a lack of attention and difficulty concentrating.

• Always "on the go"
• Always playing too loudly
• Blurting out answers to questions in school
• Cutting in line or unable to wait for a turn in activities
• Fidgeting and restlessness, almost constantly
• Interrupting others
• Not sitting in the same seat for any length of time
• Running or climbing inappropriately
• Talking too much

Signs of a lack of attention:

Most kids with ADHD show signs of both hyperactivity and attention problems. Some kids, though, may have only signs of inattention. They may have trouble concentrating and paying attention, but they may not show signs of hyperactivity. This kind of problem used to be called attention-deficit disorder (ADD). ADD is now thought of as a form of ADHD.

Having a child with ADD/ADHD has been the most difficult and challenging thing in my life. It has made me a much more easily irritated and moody person and it has made me more impatient. I don't like dealing with my 8.5yr old so I ask my husband (his stepdad) for assistance. Our child has driven our relationship apart as husband and wife. We also have a toddler who is now tending to be like his brother - misbehaves and says things he shouldn't. We argue about how to discipline the kid. Raising a child with ADD/ADHD is the most difficult thing I have EVER been through. I just want to give him back to his biological dad who is irresponsible and has ADD as well. Funny thing is...I myself have attention deficits. So that really explains the whole enchilada. Anyhow if anyone has good advice please let me know cuz i'm all out of ideas as to how to raise my child and control my irritation and moodiness. This just takes away from ANY peace and love as well as respect that we may ALL have for each other.