Dealing with Parental Abuse by Teens

"I need help with knowing what to do with my teenage son who has been getting physical with me (pushing, getting in my face, yelling, almost butting heads with me). I'm a single mom - he is bigger than me and obviously stronger. I'm worried!" 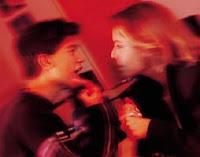 Teenagers may learn that by threatening, intimidating, and behaving in an abusive manner, they will effectively frighten a mother or father into doing what they want (e.g., giving in or allowing them to have their way). One teenager stated, “I know how to get out of being grounded. I just start knocking stuff off the shelves, and my mother tells me to get out of the house.”

Abusing the parent may also give a teenager (who’s feeling powerless) a sense of control. It should be noted that teenagers who threaten physical violence, push or hit their parents, or destroy property (as part of an overall pattern of violating the rights of others) have moved beyond typical teenage rebellion and into oppositional defiance and/or conduct disorder.

Moms and dads struggling with their teen’s abuse are often confused and belittled. It can be hard to discover ways to keep everyone safe, including the teenager whose behavior is posing the risk to positive family relationships and safety. It can be difficult to know how to make things better. You are not alone! Here are some stats:

Listen to your own warning bells. You know when things are not right, so go with your own feelings and thoughts. You may have experienced teen violence if:

Things to remember about violent behavior:

If you are suffering abuse at the hands of your teenage son or daughter, here are some tips:

1. Get your teen acquainted with anger. Anger is a normal reaction to frustrating circumstances. Teenagers need to understand that it's okay to feel this emotion, but it's not okay to punch a hole through a wall because of it. Moms and dads can try to sit down and talk with their teenagers (when everyone is calm) and help them recognize what kinds of situations trigger their aggression. Once they recognize the physical responses they have when they are getting angry, or when they've identified the kinds of situations that often gets them in trouble, they can better anticipate and avoid reacting negatively. Teach your teenagers techniques on how to diffuse their anger, or teach them to walk away before the situation escalates.

2. Make an honest self-assessment. Studies show that teenagers are more likely to get violent if they are also exposed to violence in the family. It's not okay to respond to bad situations with aggression, whether you are in a position of authority at home or not. It's also important to reconsider keeping firearms at home. Research shows that guns kept at home are more likely to be used against a family member or friend than against intruders. Make an honest self-assessment on how you and the other grown-ups at home respond to frustration, especially if the teen's actions are the source of frustration.

3. Present a united front. Moms and dads and other care-givers can work together on solutions for managing the problem of parent abuse whether it is directed at one or both parties.

4. Rebuild an appropriate parent/child relationship. Help your teen understand what you expect. Consider the use of behavior contracts and family meetings. Remove privileges when necessary and spend time together doing things you both enjoy.

5. Remind yourself that you do have inner strength and wisdom. You might not feel like it now faced with what seems like such an insurmountable problem, but you do have strength. Marshaling that strength will help you do something. It might be learning more about parent abuse, interviewing therapists, finding a support group, etc. Just doing something can help you banish the feeling of powerlessness that often comes with parent abuse.

6. Solve problems with teenagers. Moms and dads, especially those who are “overprotective,” tend to make the mistake of fixing everything for their teens. While the intention may be good, the truth is that it doesn't help teenagers develop problem-solving skills. It helps when moms and dads sit down with teenagers and problem-solve with them. Involve them in recognizing the problem, facing it squarely, and thinking about solutions and possible consequences. If the problem involves them, then it's best to make sure that they're involved in the solution as well.

7. Team up. Moms and dads must understand that they can't be with their teenagers at all times. Teenagers will never flourish and grow up to be well-adjusted citizens with their moms and dads constantly looking over their shoulders. When dealing with abusive teenagers, there are dangers that need to be addressed, and parents will not always be there to help their teenagers make the right decisions. For example, teenagers will not always listen to their mother or father about staying away from gangs and their guns. Guns are, in the eyes of teenagers, symbols of power. Teaming up with other parents, teachers, counselors, community workers and neighbors may be a more efficient way of keeping an eye on your teenagers and exposing them to positive peer influences. In a sense, it's like casting a wider net with the help of concerned and trustworthy grown-ups.

8. Think safety. Making a safety plan and calling the police, if necessary, does not mean you don’t love your teenager. We all want to protect our kids, but that protection can’t be traded against personal safety. Everyone has a right to physically and emotionally safe.

9. Understand that turning the problem around will take time. As you experiment with different resources, allow time to determine if what you are trying is really for you. If not, why not? For example, what kind of therapist do you think would work best with your family? Is it someone that values a collaborative approach? Someone that has more traditional positions on family roles and responsibilities? It is important to look for a good fit that feels comfortable.

10. You are not alone. Again, although the problem isn’t often talked about, it does exist – and it is increasingly common. Blaming is not the answer or even a useful response to the problem.

I have at times used smacking to reinforce good behaviour could this be a reason why my daughter lashes out at me. The times that I have been injured have been when I have been trying to protect the younger children. She is 17. She recognises it as inappropriate and even apologises afterwards. It has only occurred 3 time should I seek help? I don't think I would be able to get her to a psychologist.

Thank you very much for this website. I found it very
helpful to see that the behaviours
of my 12 year old grandson are
common to other children and not
acceptable. He is very intimidating and is using his anger
to control us and break the rules.
He stands outside the house and
swears at us and throws stones at
our cars etc. I can't yet bring
myself to call police or send him
away because I love him, but it may
come to that.

unconditional love said...
This comment has been removed by the author.
3:25 PM

Thankyou for this excellent article. I was a victem of abuse by my then 13 year old stepson. He pushed me out of the way, lied to people about me, stole my debit card to access porn, often stole my phone to access porn, hacked in to my trade me account & bank account, yelled & screamed at me, stole my personal things, and the list goes on. I lived in fear & anxiety for months. It escalated to a point when he got angry one day & pulled a knife threatening to stab his father & me. We called the police & he was arrested. Instead of getting help for his behaviour we were blamed by the police & CYF and accused of neglect, being a troublemaker, not getting him medical care etc. We can no longer foster children because of his actions. 4 years later im still trying to clear our name, despite numerous references, specialists saying he wasnt neglected etc we're stll having problems. The police youth worker told me '.... doesnt like you, just get used to it". I left his father for 6 months and moved back to my family. Eventually a church family took him and my husband & I reconciled. Unfortunately in N Z abuse by teens towards their parents is not recognised & is always the parents fault.

I feel your pain. My son abused me for years and blamed me... He still blames me for everything wrong in his life and gives me no credit for anything good.

I appreciated the website. My 15 year old son has a lot of past traumas. I have a whole team of support/mental health. Hes been hitting. Trying to injure me when angry power control. His always remorseful. I bought him a punching bad for his "safe room " aka bedroom. Buy abuse wont be tolerated I called police on him 3x. Yesterday taken in handcuffs. Only to return later. He needs residential treatment to handle his traumas and emotions. Its hard when its your child. But if I don't get help now it will escalate.