Dealing With The Manipulative Child 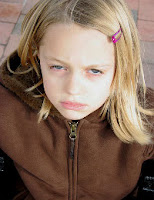 Have you ever noticed the things your child says to get her way? It’s as if she has taken a course on “how to manipulate parents.” Below are seven statements you probably have heard your child say again and again in her steadfast effort to influence and control you. See if these sound familiar, and discover some effective ways to respond to them:

1.    YOU LOVE BRANDON MORE! This is one of those comments designed to prey on a parent’s guilt. This comment about how you love one of your other children more is often effective in getting moms and dads to launch into a lengthy discussion with the youngster—and that only encourages the youngster to debate the parent’s authority. The next time your youngster accuses you of loving her sibling more, say, “You know that’s not true. I love all my children equally, but I parent them differently.”

2.    GET OUT OF MY BEDROOM! Somehow, kids have the idea that their bedrooms are off-limits, and that any parent who enters is trespassing on sacred ground. Generally, it’s O.K. to respect your child’s desire for privacy. But when moms and dads suspect that the child has stolen something, for example, they have every right to check things out.  If your child accuses you of violating her rights, simply say, “Your bedroom is a privilege –not a right. When you get your own home and pay the bills, you can put a “keep out” sign on your front door. It the meantime, this bedroom is actually mine – but, I’m willing to let you stay in it.”

3.    YOU DON’T TRUST ME! This is a favorite accusation of older children and adolescents. They’ll use this line to try to get you to relax an “established limit” (e.g., child has to be home from the Mall by 9:00 PM). How should you respond? Like this: “I trust you, but I don’t trust a bunch of strangers. That’s why I don’t think it’s safe for you to spend all evening wandering around the Mall with your friend after 9:00 on a Saturday night.”

4.    THAT’S NOT FAIR! Since moms and dads feel it’s important to be fair to their kids, this statement can really throw parents for a loop. For their part, children tend to say this when they’re trying to get their mother or father to change a “no” into a “yes.” By accusing moms and dads of being unfair, children try to make parents feel guilty so they’ll change a rule they have established.  How should you respond? How about:  “You’re right – it’s probably not fair in your mind. And I have a lot of unfair things that happen to me too. Some things in life aren’t fair. And my answer is still ‘no’.” As a parent, you have to postpone worrying about what’s fair and remain focused on what needs to be addressed (e.g., your youngster’s misbehavior).

5.    I HATE YOU! Your youngster may tell you that he hates you when he is forbidden from doing what he wants to do. A good way to respond to “I hate you” is to reframe what the youngster has said, eliminating the word “hate.”  For example: “I know you’re angry, but that’s the rule. You can’t ride your after dark.”  Kids often drop the “hate” bomb word when what they really mean is that they’re angry. It’s understandable, of course, that new or inexperienced parents would be hurt when their youngster yells “I hate you!” But try to remember that your youngster doesn’t really mean it. In a fit of rage, kids don’t always find the right words to express their feelings.

At some point in your parenting career, your kids will launch one or more of these comments your way. Like a broken record, your children may return to them again and again, hoping they’ll eventually wear you down and get their way. Use the responses above as a cheat sheet of sorts, relying on them when your children put you in a tough spot. But be sure to choose the language that makes you most comfortable.

Just remember that your youngster is saying what he’s saying to get his way. Stay focused on the current issue rather than getting derailed by your child’s comments and complaints. Your authority is not a subject open for debate.

Well, my daughter was baker acted today and when that is complete, she is off to juvenile detention and then a program. I can't stop thinking that I did this. I made her this way somehow. I didn't punish her enough or I was too hard on her when I shouldn't have been. What am I doing wrong? Why is my child now becoming violent with me and everyone else in the family? My daughter is the queen of manipulation.

Elvis said...
This comment has been removed by the author.
7:05 AM

Elvis said...
This comment has been removed by the author.
7:07 AM

My child was always ok in elementary and school and the first year of middle school. But in November of this past year, he hit puberty and from a nice, kind hearted, loving child - he became a mean, abusive, disruptive, hateful, suicidal kid. I did everything I could to try and get him help. We saw behavior therapists, homeopathists, doctors, psychiatrists, behavior specialists, psychologists. We changed schools, we had him go to social skills. Nothing helped. Many professionals wanted to put him on meds, we would not have it. I read books. I purchased programs and used them. Nothing worked. People told us we were great parents, but we thought how could we have raised a kid like this and a kid who is so unhappy? Finally because we were ready to institutionalize him - as a last resort we went to a goo psych who put him on 2 mg of abilify. He is better than ever before. He is happy and back to his kindhearted, loving, high-functioning, self. He is able to focus much better and is a joy to be around. This has been going on since February 2012. There are times that are frustrating (but I think no more than a normal teen) - but I have a new saying that "OK is great". I went through not OK for 4 months. Anytime anyone asks how my kid is doing, I always reply great. I do the same when they ask me how I am doing to. If someone told me this happened to their kid, I would not have believed that a med could help this much, but it did. I also have to say that I am so grateful for Mark Hutten who publishes these articles that we have access to. I cannot believe someone as knowledgeable as him gives us this free information that is so helpful in the parenting of our wonderful kids.

Thank you for sharing such an important information. Child our of control specialist