Are You Creating A Monster? 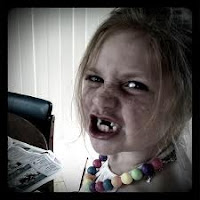 What’s up with this title: Are You Creating A Monster?

Well… in other words, are you spending a lot of time, energy and money seeing to it that your child is as “happy as a lark” to the exclusion of helping him or her develop self-reliance and a sense of personal responsibility?

Kids don’t turn into a monster because they’re innately bad. Instead, an over-indulgent parent who doesn’t provide limits and structure can foster out-of-control behavior in children. If you are creating a monster, you’ll know it. Child monsters are rude to you and other grown-ups. They won’t share with other kids. They will act bossy and demand to be first in line. They don’t answer your questions and ignore your instructions. If you deny them a new toy or treat, you’ll face a tempest of crying, howling, and little fists pounding the floor.

Here are a few more signs that you are in the process of creating a monster:

So how do avoid creating a monster? By setting age-appropriate boundaries that let children go after life exuberantly and test the limits, starting in the toddler years. Here's how:

1. Many moms and dads shower their children with gifts and never require them to earn something on their own. But spoiling your children with all the toys, clothes, and electronic gadgets they want deprives them of important life lessons (e.g., saving up for a treasured possession). If you get everything you want, you don’t learn gratitude. If you never have to wait, you don’t learn patience. Unchecked, a youngster’s sense of entitlement can spill over into the classroom, sports team, and play dates, causing rejection from other peers. Even spoiled brats hate being spoiled brats. They will be the first ones to know that their selfishness is getting in the way. They will show you, even as they’re defending themselves, that they’re envious of peers who aren’t spoiled.

2. Avoid rescuing or overprotecting your child. Is your son always late for school? Stop nagging and let him suffer the consequences of constant tardiness. It sounds simple, but most moms and dads are quick to rush in and rescue. Unless the child is in danger, let him stew in the messes he makes. Moms and dads who repeatedly shield their children from consequences thwart their growth in character.

3. Avoid the trap of over-explaining or haggling endlessly over routine matters (e.g., tooth-brushing, turning off the video game, bedtime, etc.). Your youngster will only argue with you like a pint-sized lawyer. Does your 10-year-old son really need dozens of nightly reminders about the benefits of personal hygiene if he’s smart enough to beat you at Chinese checkers?

4. Be consistent. Always do what you say you're going to do. If you tell your daughter there will be consequences for a certain behavior, she should know you mean it. “This time I'm really taking your iPod away if you don't get busy doing your homework" doesn't work when you've already said it ten times.

5. Commit yourself wholeheartedly to stop creating a monster. You have to commit. If you do it halfway, it’s better than not at all, but it’s not going to work until you really do it. For example, a mother who wants a youngster to start cleaning his room has to make sure that the job gets done right. If you pick up one crayon and a piece of clothing and that’s it, it isn’t going to work.

6. Don't let your guilt get in the way of your parenting. Your job as a mother or father is not to make yourself feel good by giving your son or daughter everything that makes you feel good when you give it.

7. Provide consistent discipline and consequences. Actions speak louder than words. Cut the chatter and provide concrete consequences. For example, is tooth-brushing a problem for your youngster? Try no snacks for the entire next day. No warnings, no threats, just a total prohibition of junk food for the next 24 hours.

8. Redefine what taking care of your kids means. Are you providing for them emotionally and spiritually? You need not buy them material goods in order to create a bond. Instead of tangible gifts, how about spending some time together? Be careful that you aren't teaching them that emotions can be healed with food and fun activities.

9. Replace empty threats with clear, calm, concise instructions. Children hear their moms and dads say, "stop, no, it’s the last time." All the screaming and the counting to three and the threats -- we have trained them to ignore us for 11 hours because they know that in the 12th hour, they’re going to get their way. Say what you mean. If you just say the words and say what’s going to happen and stick to it, that’s what has the power -- the consequence. You don’t even have to yell.

10. Stay calm. Losing your temper with bad behavior only makes you feel bad and look out of control (kind of like a monster) -- and it doesn't teach the youngster better behavior.

11. Stay on track. Despite a parent’s best intentions to stop creating a monster, lots of things can derail the effort (e.g., fatigue, being overwhelmed by work responsibilities, marital troubles, etc.). Moms and dads can remind themselves that the reason they’re going to give in is a selfish reason -- because it’s easier. Remind yourself that you didn’t hesitate when the child, as a 2-year-old, wanted to drink the Chlorox. You had to take it away from them, right? Even if they said they hated you and they screamed, you didn’t feel bad about that. You have to develop the same mind-set and realize that this is best for them.

12. Talk openly with your child about behavior as he gets older. School-age children are capable of insight, so sit down and to try to figure problems out together. For example, if you ask a son, "Why are you doing this?" …he may not be able to tell you. But if you say, "I wonder why this keeps happening" …that open-ended question might give him the room to speculate. You might be surprised by what you learn!

The bottom line is this: Your primary job as a mother or father is to prepare your youngster for how the world really works. In the real world, you don't always get what you want. You will be better able to deal with that as a grown-up if you've experienced it as a youngster.

Thanks for that awesome posting. Useful, and it saved MUCH time! :-)