When Your Teen's Friends Are A Bad Influence 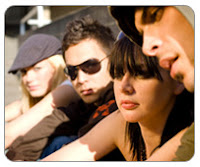 If your teenager was hanging out with the wrong crowd, how would you know? Have you noticed a change in your teen’s behavior or a lack of respect for what used to be important? Bad influence from hanging around the wrong people shows up in various ways, and peer pressure gives teenagers a new attitude about life that may not be to the liking of all moms and dads.

If your teenager is associating with the wrong crowd, here are some tips that may help:

1. Come to terms with the fact that you can't pick your teen’s friends. In fact, if you criticize a particular friend – that’s the friend your teen will most likely want to hang out with. Teens are developmentally bound to defend their chosen peer group. During adolescence, your teen’s friends are more important than anybody else – including you! While your goal as a mother or father is to keep your teenager safe, your teen’s goal is to be with people who like him or her.

2. Don’t be afraid to set limits with your teenager. Remember, you have a right and a legal responsibility (at least until their 18th birthday) to make the rules for him or her.

4. In the process of setting limits, allow your teen some input in establishing the rules. Draw up a written contact to eliminate any misunderstanding, and both of you sign it.

6. Offer your teenager a “cool” activity as an alternative to going out with the wrong crowd (e.g., “movie-and-pizza night”).  If you just say, “You can't go out. I’m going to keep you at home and not giving you anything better to do,” you are inviting rebellion.

7. Open up your home and have your teenager's friends over periodically. Order in some pizzas and spend some time with them. Don't hover, but get an idea of who they are, their personalities and what makes them tick.

8. Parents tend to share their opinions far too often in the teenage years, because they don't want their teenager to make the same mistakes they did. However, it’s best to “back off” and offer your wisdom only when your teenager asks for it. So, be sure to talk with your teenager, but do so mostly with your eyes and ears – not your mouth.

9. Sit down with your teenager and give her reasons why you don't approve of a particular peer she is spending time with. But instead of “forcing” your teen to stop seeing this person, “ask” her to stop. Leave it to be her decision based on your conversation.

10. Understand that if your teen doesn’t feel valued and significant in your home, he will look for value and acceptance somewhere else. There are plenty of peers who can make him feel valued, but mostly from the wrong crowd and with the wrong motives. There are four things you can offer your teen to make her feel valued: your experience, your time, your unconditional love, and your wisdom. Each of these builds value. Being valued makes a teen feel like she belongs, builds her self-esteem, and helps her have the confidence to say "no" to those peers who are a negative influence.