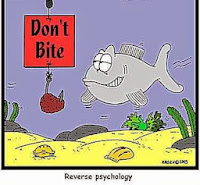 In order to really take advantage of “reverse psychology” as an effective parenting tool (and not have anyone catch on to it), parents really need to have a clear understanding of what it is and how it works.

Parents are using reverse psychology when they intentionally argue in favor of a decision or behavior while secretly wanting their child to endorse the opposite decision or behavior. The technique makes use of the psychological phenomenon of “reactance” (i.e., an emotional reaction in opposition to perceived restrictions on a person’s behavioral freedoms).

Here are some examples of “good” reverse psychology:

So, you’re basically trying to get your kids to do the exact opposite of what they think you really want them to do.

Here is an example of “bad” reverse psychology:

If you haven’t used reverse psychology on your kids yet, it’s time to add it to your parenting toolbox. Kids are notorious for waiting for you to tell them something – and then doing the exact opposite. They thrive on doing the opposite of whatever they know is expected of them (which may very well be a version of reverse psychology in and of itself).

By telling your kids the opposite of what you want them to do, they may (after being slightly confused) do exactly what you want them to. It’s important to keep in mind, however, that kids are very impressionable. Only use reverse psychology in special circumstances, and avoid using it in ways that could harm your youngster’s self-esteem.

No matter when or how you decide to use reverse psychology, know that there is a major difference between psychology and manipulation. Using reverse psychology every once in a while is okay (so long as no one is going to be injured by it). If you take it too far, or use it too often, you will quickly become known as a manipulator. Remember that once tarnished, your reputation is something you can never get back. Also, if you are dealing with compliant kids (as opposed to resistant ones), it may be better to ignore reverse psychology altogether and just be direct.