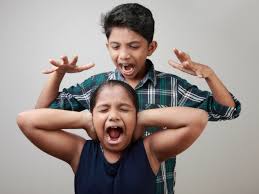 We have a 15 1/2 year old son who is defiant… possibly even ODD, although we've not gotten any diagnosis (even though we have seen two different therapists). Just to let you know, he is a straight "A" 10th grade student, in all Honors and AP Classes, who this school year alone, has received 3 "Student of the Month" Awards. We have been implementing your program and I definitely see some very positive results. There is one area where I am really not sure how to respond/act when he does this particular behavior: he will purposely touch/or say something to annoy/bother one of his three brothers, and then he will deny that he just did it, even when I am right there and actually see it. What should I do or say when this happens? He is very bothered when I address this and does not like to have to answer any questions regarding this issue. Do I impose a consequence for this behavior? How do I get him to admit what he has actually done? Because it really bothers his brothers, I cannot just ignore this behavior, it really affects his brothers negatively. I also am wondering, can a child like this actually turn on and off these behaviors at will?? When we did see the therapists, he absolutely refused to talk or admit that anything was wrong. The very few times he did say something, he was very rude and even hateful toward the therapists. If you could give me some advice on the few things I mentioned, I would greatly appreciate it. Thank you.

Moms and dads have been taught that they must be impartial when sibling-conflict issues arise… but this can be extremely difficult. It's inevitable that moms and dads will feel differently about kids who have different personalities with differing needs, dispositions, and place in the family.

While it may be common for brothers and sisters to fight, it's certainly not pleasant for anyone in the house. And a family can only tolerate a certain amount of conflict. So what should you do when the fighting starts?

Ever since we decided that sibling rivalry is normal, we've had a terrible time figuring out what to do about it. However, here are some do's and don'ts that may be helpful in dampening down sibling rivalry within a family:

• Don't dismiss or suppress your kid's resentment or angry feelings. Contrary to what many people think, anger is not something we should try to avoid at all costs. It's an entirely normal part of being human, and it's certainly normal for siblings to get furious with one another. They need the adults in their lives to assure them moms and dads get angry too, but have learned control - and the angry feelings do not give license to behave in cruel and dangerous ways. This is the time to sit down, acknowledge the anger ("I know you hate David right now but you cannot hit him with a stick") and talk it through.

• Don't make comparisons. ("I don't understand it. When Johnny was her age, he could already tie his shoes.") Each youngster feels he is unique and rightly so-he is unique, and he resents being evaluated only in relation to someone else. Instead of comparison, each youngster in the family should be given his own goals and levels of expectation that relate only to him.

• Don't put too much focus on figuring out which youngster is to blame. It takes two to fight — anyone who is involved is partly responsible.

• Even then, encourage them to resolve the crisis themselves. If you do step in, try to resolve problems with your kids, not for them.

• If you're concerned by the language used or name-calling, it's appropriate to "coach" kids through what they're feeling by using appropriate words. This is different from intervening or stepping in and separating the kids.

• Separate kids until they're calm. Sometimes it's best just to give them space for a little while and not immediately rehash the conflict. Otherwise, the fight can escalate again. If you want to make this a learning experience, wait until the emotions have died down.

• Try to avoid situations that promote guilt in siblings. First we must teach kids that feelings and actions are not synonymous. It may be normal, for example, to want to hit the baby on the head, but moms and dads must stop a youngster from doing it. The guilt that follows doing something mean is a lot worse than the guilt of merely feeling mean. So parental intervention must be quick and decisive.

• Try to set up a "win-win" situation so that each youngster gains something. When they both want the same toy, perhaps there's a game they could play together instead.

• When possible, let brothers and sisters settle their own differences. Sounds good but it can be terribly unfair in practice. Moms and dads have to judge when it is time to step in and mediate, especially in a contest of un-equals in terms of strength and eloquence (no fair hitting below the belt literally or figuratively). Some long-lasting grudges among grown siblings have resulted when their minority rights were not protected.

• Whenever possible, don't get involved. Step in only if there's a danger of physical harm. If you always intervene, you risk creating other problems. The kids may start expecting your help and wait for you to come to the rescue rather than learning to work out the problems on their own. There's also the risk that you — inadvertently — make it appear to one youngster that another is always being "protected," which could foster even more resentment. By the same token, rescued kids may feel that they can get away with more because they're always being "saved" by a parent.

Remember, as kids cope with disputes, they also learn important skills that will serve them for life — like how to value another person's perspective, how to compromise and negotiate, and how to control aggressive impulses.