How Should I Discuss "Puberty" With My Child? 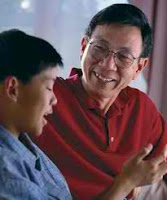 Today, children are exposed to so much information about sex and relationships on TV and the Internet that by the time they approach puberty, they may be familiar with some advanced ideas. And yet, talking about the issues of puberty remains an important job for moms and dads because not all of a youngster's information comes from reliable sources.

Don't wait for your youngster to come to you with questions about his or her changing body — that day may never arrive, especially if your youngster doesn't know it's OK talk to you about this sensitive topic.

Ideally, as a mother or father, you've already started talking to your youngster about the changes our bodies go through as we grow. Since the toddler years, children have questions and most of your discussions probably come about as the result of your youngster's inquiries.

It's important to answer these questions about puberty honestly and openly — but don't always wait for your youngster to initiate a discussion. By the time children are 8 years old, they should know what physical and emotional changes are associated with puberty. That may seem young, but consider this: some females are wearing training bras by then and some males' voices begin to change just a few years later.

With females, it's vital that moms and dads talk about menstruation before they actually get their periods. If they are unaware of what's happening, females can be frightened by the sight and location of blood. Most females get their first period when they're 12 or 13 years old, which is about two or two and a half years after they begin puberty. But some get their periods as early as age 9 and others get it as late as age 16.

On average, males begin going through puberty a little later than females, usually around age 11 or 12. But they may begin to develop sexually or have their first ejaculation without looking older or developing facial hair first.

Just as it helps grown-ups to know what to expect with changes such as moving to a new home or working for a new company, children should know about puberty beforehand.

Many children receive some sex education at school. Often, though, the lessons are segregated, and the females hear primarily about menstruation and training bras while the males hear about erections and changing voices. It's important that females learn about the changes males go through and males learn about those affecting females, so check with educators about their lesson plans so you know what gaps need to be filled. It's a good idea to review the lessons with your youngster, since children often still have questions about certain topics.

When talking to children about puberty, it's important to offer reassurance that these changes are normal. Puberty brings about so many changes. It's easy for a youngster to feel insecure, and as if he or she is the only one experiencing these changes.

Many times, teens will express insecurity about their appearance as they go through puberty, but it can help them to know that everyone goes through the same things and that there's a huge amount of normal variation in their timing. Acne, mood changes, growth spurts, and hormonal changes — it's all part of growing up and everyone goes through it, but not always at the same pace.

Females may begin puberty as early as second or third grade, and it can be upsetting if your daughter is the first one to get a training bra, for example. She may feel alone and awkward or like all eyes are on her in the school locker room.

With males, observable changes include the cracking and then deepening of the voice, and the growth of facial hair. And just as with females, if your son is an early bloomer, he may feel awkward or like he's the subject of stares from his classmates.

Children should know the following about puberty:

Not surprisingly, children usually have lots of questions as they learn about puberty. For you, it's important to make sure you give your youngster the time and opportunity to ask questions — and answer them as honestly and thoroughly as possible.

Some common questions are:

• I'm a male, so why am I getting breasts? Some males experience temporary breast growth during puberty. The condition, called gynecomastia, is caused by changing hormone levels during puberty. It usually disappears, often within a few months to a couple of years.

• What is this hard lump in my breast? Females may notice small, sometimes tender, lumps beneath their nipples as their breasts are beginning to develop. This is perfectly normal. The firmness and tenderness will go away in time as the breasts continue to enlarge.

• Why are my breasts so small (or so large)? Breast size is different from person to person, and your daughter needs to be reassured that, big or small, all breasts are beautiful. It can be hard for females to appreciate this since they develop at different times and rates. The size and shape of your daughter’s breasts will change as she continues to develop. But in the end, size won't affect your daughter's attractiveness or her ability to breastfeed if she becomes a mother someday.

• Why don't I have pubic hair yet? Everyone develops pubic hair, although some teens get it later than others. Just as with breast size or height, the amount or thickness of pubic hair is an individual trait.

• Why haven't I gotten my period yet? As with all of the changes in puberty, periods come at different times for different females. Females usually don't get their periods until 2 or 2½ years after starting puberty, so if your daughter started puberty later than other females, she will probably get her period later than other females as well. Some females may not get their periods until they're 16. This is usually normal, although it can be tough for them when all of their friends have already gotten their periods.

• Why is my penis so small (or so large)? With males, the focus can be on the penis. Since not all males develop at the same time or rate, your son may feel like he is too big or too small. His size will change as he continues to develop. Penises come in different sizes and shapes, but there are a lot less differences in size when penises are erect than when they’re not.

Let your youngster know that you're available any time to talk, but it's also important that you make time to talk. As embarrassing or difficult it may be for you to talk about these sensitive topics, your youngster will likely feel even more uncomfortable. As a mother or father, it's your job to try to discuss puberty — and the feelings associated with those changes — as openly as possible.

It can be made easier if you're confident that you know the subject matter. First, before you answer your youngster's questions, make sure your own questions have been answered. If you're not entirely comfortable having a conversation about puberty, practice what you want to say first or ask your youngster's doctor for advice. Let your youngster know that it may be a little uncomfortable to discuss, but it's an important talk to have.