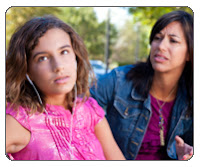 The cold shoulder (also referred to as “the silent treatment”) is a common punishment used by teens. It is manifested by a child who completely ignores his parents, going through his typical day as if his parents were invisible or absent, even if the parents are standing right in front of him or talking to him.

What parents need to understand is that the cold shoulder is frequently utilized as a lever to gain control in the power struggles of the parent-child relationship – and it works because most parents react in a way that tells the child she is winning. Never is this more evident than in the conflicts associated with a “resentful” teenager. When a resentful teen uses the cold shoulder, she takes it to the extreme. A resentful teen may refuse to speak to – or even acknowledge – parents for great lengths of time, and may even demand an apology that is out of proportion to the perceived offense.

The cold shoulder is usually used to silently express contempt or disapproval. It is a common response used by teens who can’t tolerate being on the receiving end of a parent’s self-assertiveness (e.g., a parent who is consistent with issuing consequences for misbehavior). The cold shoulder effectually cuts parents off from the teen, and sends a clear message to parents about how insignificant they are and how easy it is for the teen to live without them. This strategy is used by insecure adolescents with a poor self-image who have no other problem-solving skills (yet). When parents do something that displeases the resentful teen, they cease to exist for a certain period of time (and most often, extensive and disproportionate amounts of time).

The resentful teen also uses the cold shoulder to throw his parents off balance. The teen does this to find out exactly how much control he has over the parents. The most typical reason is to “punish” his parents for some good they failed to do, or some wrong they did (and probably are unaware of). Of course, if parents directly ask the teen about it, he will deny it.

The resentful teen also uses the cold shoulder as a way to get a reaction from parents. Typically, parents ask their resentful teen, “What is wrong, why are you ignoring me?” This lets the child know she has been successful in pushing her parents' buttons. It also gives her power to do whatever she wants. If parents don’t accept her behavior, she will then use the cold shoulder again to draw them back in to the cycle.

It’s theorized that the cold shoulder is a learned behavior. A child may observe parents using the cold shoulder and copy it as a way to punish others or get them to comply with his wishes. Moms and dads greatly affect their youngster’s behavior. A child is like a sponge – he models everything his mother or father does and incorporates what he sees into his own life. According to research done by the University of Chicago published in the Journal of Abnormal Child Psychology, an antisocial teenager learns his negative behavior from his parents’ examples.

So what is a parent to do about “the cold shoulder” treatment? Just two things really:

1. Model tolerance. If you say something to your teenager, and then get the cold shoulder, simply acknowledge that you noticed this – and move on. Here are two examples: