Violent Media and the Violent Child 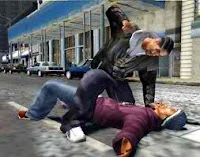 Most parents think that violence in the media is fairly harmless.

Recent research has shown that:

1. There is a 12% increase in aggressive behavior after watching violent television.

2. Heavy television viewers (4 or more hours a day) put in less effort at school, have poorer reading skills, play less friendly with friends, have fewer hobbies and activities, and are more likely to be overweight.

3. There is a connection between playing violent video games and aggressive behavior.

The American Psychological Association states there are 3 major effects of watching violence in the media (i.e., video games, movies, television):

Everything that kids see or hear in the media early on in their lives affects them in some way. Parents are told that -- in the best interest of their kids -- they should limit their exposure to violent acts. Unfortunately, violence is one of the most popular forms of entertainment. Over 60% of television shows being shown in prime time contain some form of violence.

Current research tends to argue that violent media is associated with aggressive behavior, for example:

The Academy of Pediatrics states that more than 1,000 scientific studies and reviews conclude that significant exposure to media violence:

If kids begin to think that this type of violence is normal behavior these thoughts are often said to be difficult to change later on in life. This is similar to the studies of domestic violence where kids who are exposed to violence either become offenders or victims because they believe that what they are exposed to is the norm.

Another view from researchers suggests that performing violent acts in video games may be more influential to kid's aggression than passively watching violent acts on television. According to this view, the more kids “practice” violent acts, the more likely they are to perform violent acts.

The National Coalition on Television Violence reported there has been a consistent increase in the number of violent themed video games. The agreement among researchers on television violence is that there is a significant increase (from 3% to 15%) in kids' aggressive behavior after watching violent television.

It should be noted that violent media are not the only cause of kids committing violent acts. The involvement of moms and dads in what their kids watch, how the family interacts with each other, and what the kids are exposed to in their environment are additional indicators of how they will behave and what value system they will follow.

Violent behavior in kids and teens can include a wide range of behaviors:

Parents and teachers should be careful not to minimize these behaviors in kids. Whenever a parent or other adult is concerned, they should immediately arrange for a comprehensive evaluation by a qualified mental health professional. Early treatment by a professional can often help.

The goals of treatment typically focus on helping the youngster to:

==> Help for Parents with Violent Children and Teens

I have a 13 yr old with aspergers and I am at my wits end. He is very very defiant and refuses to do things.......there is no reasoning with him....if I try to intervene he is violent and smashes up his belongings and my house.

I have been working with a psychologist but I feel I am not getting anywhere which is why I bought your book as you seem more specialised.

I would appreciate your advice regarding the main problem in our house which is his xbox and more specifically the game Call of Duty. He has this as all his friends do and they play online. I have a schedule.....if he does homework, does his intrument practice etc. he can earn time on the xbox....any bad bad behaviour he loses the xbox that day....he can build up extra time with good behaviour.

The problem is even though I have re-inforced this and give him lots of notice his time is running out.....he is now totally defiant and will not come off the game at the end of the period. We have taken the xbox away for several days due to this....then started again and he again will be defiant....if we then take the xbox he gets violent again...very violent. I feel hie is now running our lives. He has now started to refuse to get out of bed for school and we have to use force to push him into the car...often he will run off.

My main problem is his time on the xbox and getting him to understand he must stop and hand me the controller. Also if I will not give him the controller when he comes in from school some days he will be violent...put his hands around my neck etc.

See professional help immediately. Find a psychiatrist that specializes in children and teens with Asperger's. His grabbing your throat is very dangerous. He is no longer a child. He may be addicted to (obsessed with) the game. Taking away the Xbox would be a solution for an average 13 year old. But if he cannot maintain control regarding it, you are putting yourself, and him, in a very dangerous situation. Seek help professional immediately. He may need more than behavioral therapy at this time.