Dear Mr. Hutton, I just finished reading session 1. I know my daughter has been over-indulged and she possesses most of the personality characteristics you describe as a result of this style of parenting. I definitely want to stop the "free handouts" and foster self-reliance in my daughter as well as my other two children. The problem is I am recently divorced and my ex-husband does everything you describe in the permissive, self-indulgent parenting style. I think he is doing this to be "popular" , "win our daughter over" and to make up for feelings of "guilt" he must have for committing adultery. He is currently taking me to court to gain full physical and legal custody of this 12-year-old daughter only. I believe this is too reduce his financial support to me. We have two other younger children together ages 9 and 5 years old. I also have a restraining order against him. My point in telling you this is that I cannot discuss parenting issues with my ex-husband. 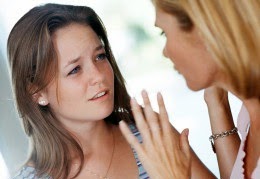 My question is when I refuse to buy "handouts" for my daughter she does not care or have a need to earn money because she can receive the "handout" from her father on her next visitation day. For example, I offered to buy her basic jeans (she needed new pants to wear) at Walmart but she wanted "designer jeans" from Macy's. Her father bought her the "designer jeans" at Macy's on his next visitation day with her. This daughter also wants to live with her father. I feel this is because she can "run free" and have minimal rules as well as have all the material things she wants. I really need your program because she has become a "nightmare" for me to parent. She is using the divorce to manipulate what she wants from everyone. Is there any way I can foster self-reliance in my children? My counselor told me that no parenting program I use will work because my ex-husband undermines it with his permissive style of parenting. I want to have "hope"! Thanks for your time.
Answer

When parents disagree about discipline, the underlying issue is often a conflict in parenting styles. Parenting styles develop in a complex process from childhood history to adult knowledge and experience. Because parenting styles are rooted in individual belief systems, polarization and conflict are common when parents' styles differ.

While these two styles are opposites at their core, they can find common ground. The way to resolve this conflict is for both parents to take one step to the more balanced and healthy authoritative parenting style.

The indulgent parent can move toward authoritativeness by becoming more demanding of the child. The indulgent parent should practice saying 'no' to the child. He or she should seek out knowledge of effective child discipline strategies and use them to address misbehavior. Finally, this parent should focus on helping the child build skills of self-control and adult and peer interactions. Teach the child to respect the authority of adults in his world; to understand consequences and control impulses; and, to develop good relationships with peers.

Conflict between authoritarian and indulgent parents will not subside without effort from both parents. It's not so much about compromise as it is about learning from each other. Belief systems about parenting can remain intact while both parents learn new skills.
Kids learn to manipulate their parents following a divorce, gaining more control of their situation in a two-household family.

The majority of adolescents actively interpret their parents' behaviors in order to manage relationships to their perceived advantage. The kids gather and interpret info about parents, dodge questions, engineer images of themselves, parry parents' probes, maneuver between households, and cut ties with parents to exert their own authority.
Several strategies are used:

None of these options would be available to a child in a single household with two parents.
It’s surprising how many children learn to manipulate their parents after a divorce. Some parents have the attitude that their children would never do so, but it is common. They may see it as a viable avenue to get their own way. Young children do it as well as older children. The difference is the way they go about it and what they are attempting to get out of the deal.

It is understandable why parents would fall for this though. After all, they don't want their children to be traumatized by what has taken place. They want to see their children happy and thriving in their environment. Make sure you are consistent with the rules you have set for your children though. They may come to you and say a later curfew or hanging out with friends without adult supervision makes them feel better. This is just a ploy to get you to let them do what they want to do.

You should expect your child to attempt to test the limits though. They may tell you they want to go live with their other parent when you don't give in to them. This is going to hurt you and they know it. Stand firm and tell them you are sorry they feel that way but that you are sticking by your decision. If you can work out similar rules at both homes with your ex this issue will be eliminated for both of you.

It is true that children can have conflicts in life that are a direct result of the divorce. For example your child may have drop in their grades or changes in their attitude. While you need to understand this, they need to know that the divorce isn't an excuse for letting things go. They still need to be doing their homework and they still need to be respecting you. They need to help out at home and do what is asked of them without problems.

Make sure you understand the difference between what your children need and when they are attempting to get one over on you. They may find your defenses are down after a divorce and use it to their benefit. Don't be too hard on your children if you find out this is what is going on. Let them know you are disappointed though and that they aren't going to be allowed to continue doing it.

One of the reasons why children are able to successfully manipulate their parents after a divorce is due to the parents feeling inadequate. They don't want to let their children down any more than they feel they already have. They also have a fear that their children won't love them as much as the other parent if they don't give in to their desires. That isn't the reality of it though.

I had been arguing with my close friend on this issue for quite a while, base on your ideas prove that I am right, let me show him your webpage then I am sure it must make him buy me a drink, lol, thanks.

I would let her live with her dad if she wants it that badly... On the condition that she comes to your place at least once a week. You can do something nice that once a week like watching a movie, watching a sibling play hockey or maybe a treat like the zoo. But stick to your own rules when she's around - tell her she does not get her way all the time at your place just because she does with dad - and she doesn't leave early just because she didn't get her way.