Is your adolescent rebelling, defying your curfew, or hanging out with questionable kids? Here's how to nip behavior problems in the bud: 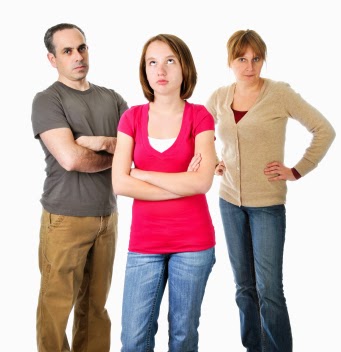 To be fair, no one has ever pretended that parenting an adolescent was going to be easy. Still, until your own kids reach that stage, it's tempting to believe your family will be immune to teen behavior problems. No, you tell yourself, your adolescent will never talk back, stay out too late or pierce her eyebrow. Dream on...

Adolescents are basically hard-wired to butt heads with their moms and dads. Adolescence is a time of rapid change for kids both physically and cognitively. It's the task of the adolescent to fire their moms and dads and then re-hire them years later, but as consultants rather than managers. But that doesn't mean you have to take it lying down. With the right approach, you can troubleshoot the following teen behavior problems in a relatively civilized fashion.

Your Teen Seems To Hate You—

One minute your sweet youngster is begging you to come on the class trip or to lie down with her while she falls asleep. Then, seemingly overnight, she starts treating you like dirt, discounting everything you say and snickering at your suggestions. If you look closely, you'll see that you've been through this before, when she was a toddler -- only instead of shouting "no!" like a two-year-old would, an adolescent simply rolls her eyes in disgust.

It's so hard for moms and dads when this happens. But part of adolescence is about separating and individuating, and many kids need to reject their moms and dads in order to find their own identities. Teens focus on their friends more than on their families, which is normal too.

Sometimes moms and dads feel so hurt by their teens' treatment that they respond by returning the rejection -- which is a mistake. Adolescents know that they still need their moms and dads even if they can't admit it. The roller-coaster they put you on is also the one they're feeling internally. As the parent, you need to stay calm and try to weather this teenage rebellion phase, which usually passes by the time a youngster is 16 or 17.

But no one's saying your teen should be allowed to be truly nasty or to curse at you. When this happens, you have to enforce basic behavior standards. One solution is the good, old-fashioned approach of: "If you can't say something nice, don't say anything at all." By letting your adolescent know that you're here for him no matter what, you make it more likely that he'll let down his guard and confide in you once in a while, which is a rare treat.

It's ironic that teenage forms of communication like IM-ing, text-messaging and talking on cell phones make them less communicative, at least with the people they live with. In today's world, though, forbidding all use of electronic devices is not only unrealistic, but unkind. Being networked with their friends is critical to most teens.

Look at the big picture. If your youngster is functioning well in school, doing his chores at home and not completely retreating from family life, it's probably best to "lay off." It's also OK to set reasonable limits, such as no "texting" or cell phone calls during dinner. Some moms and dads prefer not to let teens have computers in their rooms, since it makes it harder to supervise computer usage, and this is perfectly reasonable. Many experts also suggest establishing a rule that the computer has to be off at least one hour before bedtime, as a way to ensure that teens get more sleep.

One good way to limit how many minutes your teen spends talking on his cell and texting: Require him to pay his own cell phone bills. And do your best to monitor what your youngster does when he's online, particularly if he is using networking sites like Facebook. You still own the home and computer -- so check into parental Internet controls and software to monitor use of any questionable web sites.

Staying Out Too Late—

It's 10:30 p.m. and you told your daughter to be home by 10 p.m. Why does she ignore your curfew again and again? Part of what teens do is test limits. But the fact is that they actually want limits, so moms and dads need to keep setting them.

Do some research before insisting that your youngster respect your curfew because it's possible that yours is unreasonable. Call a few parents of your teen's friends and find out when they expect their kids home. I suggest giving kids a 10-minute grace period, and if they defy that, to set consequences -- such as no going out at night for a week.

If it seems like your youngster is staying out late because she's up to no good, or doesn't feel happy at home, then you need to talk with her and figure out what might be going on. However, if your curfew is in line with what what's typical in your teen's crowd, then it's time to set consequences and then enforce them if your teen continues to break your rules. When you make a rule, you have to mean it. You can't bluff adolescents -- they will always call you on it.

You wince every time your son blasts through the front door with his greasy-haired, noisy buddies. Should you suck it up, or say something?

Kids can wear weird clothes, pierce their lips, act rudely and still be decent kids. Moms and dads should hold off on criticizing something as superficial as fashion in their kids' friends. Adolescents are so attached to their friends that it's like criticizing them directly.

On the other hand, if you know that your youngster has taken up with a group of troubled teens who skip school and do drugs, a talk is in order. Without putting him on the defensive, tell your youngster you're concerned about who he's hanging out with and that you're worried he's doing drugs. While you can't forbid your youngster to hang around with certain kids, you can intervene and try to nip dangerous behaviors in the bud. Don't be afraid to ask for professional help about hanging out with a crowd engaged in negative behavior. Counseling or family therapy can help.

Every little thing seems to set your daughter off lately, and the more you try to help, the more she sobs or shouts or slams the door. Part of being an adolescent is feeling things intensely, so what may seem like no big deal to you is hugely important to her.

Moms and dads tend to trivialize the importance of things in adolescents' lives. What happens is that kids feel misunderstood, and eventually they will stop telling you anything. Right now it is the most important thing in the world that her best friend is flirting with her boyfriend, and you need to take it seriously.

Don't offer advice, disparage her friends or try to minimize it by saying that one day she'll see how silly high school romances are. Just listen and sympathize. And put yourself in her position -- because, after all, you were once there yourself.