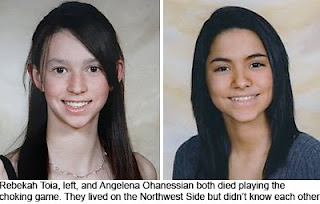 Fifteen-year-old Rebekah Toia was bright and attractive and had lots of friends. She was an honor student at her High School, a softball player and loved writing fantasy stories and poetry.

The night before she died, she had come home from a party, went into her room and an hour later came out and asked her mom if she could sleep with her. In the morning, her mother made pancakes for her. Rebekah took the dog out for its morning walk. When her mother left for work, each told the other, "I love you."

When Barbara Toia came home from work Tuesday afternoon, she found Rebekah hanging by her neck from a cloth belt attached to the top of her bedroom door. She was not breathing.

Her death – and that of 14-year-old Angelena Ohanessian who died the same way two weeks earlier – prompted Chicago police to issue an alert to parents about the dangers of the "choking game."

Both girls, who didn't know each other, succumbed to the deadly game, they say. The point of the game is to induce a feeling of euphoria by temporarily depriving the brain of oxygen by applying pressure to the neck until the person passes out.

Teens have been finding information and instructions about the choking game for years on the Internet, where it is variously known as Passout, the Fainting Game and Good Kids High, among other names.

In 2008, the Centers for Disease Control and Prevention reported 82 deaths attributed to it and other strangulation activities from 1995-2007. Most victims, unlike the two recent Chicago cases, were boys 11 to 16 years old.

The choking game is a dangerous practice of tweens and teens in which they self-strangulate in order to achieve a brief high. The high is the result of oxygen rushing back to the brain after its cut off by the practice of strangulation.

The choking game (also known as Space Monkey) is very dangerous and can easily lead to accidental death. According to the Centers for Disease Control (CDC), there were more than 80 deaths due to the choking game in children aged 6 to 19 from 1995-2007. Boys are more likely to die from the choking game, but the behavior is a danger to both boys and girls.

In order to achieve a high, children may use ropes, scarves, or other items to strangle themselves, either alone or within a group.

Whether it's done as a dare, a rite of passage or a desire to get high without using drugs or alcohol, the choking game has potentially deadly consequences. Understand how the choking game works — and what you can do if you think your youngster may be involved in this dangerous activity. 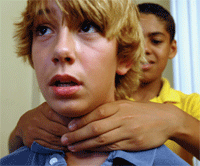 What is the choking game?

Participants in the choking game — typically teens — attempt to trigger a high by temporarily depriving the brain of oxygen through strangulation. The choking game is often done with a noose or another person's hands around the participant's neck. A youngster may also take a deep breath, hold it, and have someone hug him or her from behind until he or she feels dizzy and passes out.

What are the consequences of the choking game?

What are the warning signs of the choking game?

Warning signs that a youngster may be playing the choking game include:

Your youngster may be at higher risk of playing the choking game if he or she has had mental health problems or substance abuse issues.

What can I do if I suspect my child is participating in the choking game?

Wow this is a great resource.. I’m enjoying it.. good article