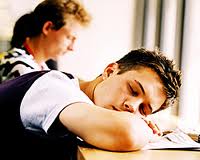 Research demonstrates that teens require 8½ to more than 9 hours of rest a night.

You do not need to be a math expert to figure out that if you wake up for school at 6:00 AM, you would have to go to sleep at 9:00 PM to attain the 9-hour mark. Scientific studies have discovered that many teens have difficulty falling asleep that early, though. It's not due to the fact they don't want to snooze. It is due to the fact their brains normally work on later schedules and aren't ready for bed.

Many teens have sleep problems. Examples include:

During adolescence, the body's circadian rhythm (sort of like an internal biological clock) is reset, telling a teen to fall asleep later at night and wake up later in the morning. This change in the circadian rhythm seems to be due to the fact that the brain hormone melatonin is produced later at night in teens than it is for kids and adults, making it harder for teens to fall asleep. Sometimes this delay in the sleep-wake cycle is so extreme that it impacts a person's daily functioning. In those cases it's called delayed sleep phase syndrome.

Changes in the body clock are not the only reason teenagers lose sleep, though. Plenty of individuals have sleeplessness — trouble falling or staying asleep. The most common cause of sleeplessness is anxiety. But all sorts of things can lead to sleeplessness, including bodily discomfort (the stuffy nose of a cold or the pain of a headache, for example), emotional troubles (like family problems or relationship difficulties), and even an uncomfortable sleeping environment (a room that's too hot, cold, or noisy).

Adolescents are well known for staying up late at night and being hard to wake up in the early morning. Your adolescent is probably no exception, but it's not necessarily because he or she is lazy or contrary. This behavior pattern actually has a physical cause — and there are ways to help mesh your adolescent's sleep schedule with that of the rest of the world.

Irritability aside, sleep deprivation may have significant consequences. Daytime sleepiness makes it hard to focus and learn, or even stay awake in class. Too little sleep may contribute to mood swings and behavioral problems. And sleepy adolescents who get behind the wheel may cause serious — even deadly — accidents.

Catching up on sleep during the week-ends appears like a reasonable remedy to adolescent sleeping difficulties, but it does not help much. In fact, sleeping-in can confuse your adolescent's internal clock even more. A forced early bedtime may backfire, too. If your adolescent goes to bed too early, he or she may only lie awake for hours.

Don't assume that your adolescent is at the mercy of his or her internal clock. Take measures this evening by doing the following:

• Curb the caffeine. A jolt of caffeine may help your adolescent stay awake during class, but the effects are fleeting. And too much caffeine can interfere with a good night's sleep.

• Nix long naps. If your adolescent is drowsy during the day, a 30-minute nap after school may be refreshing. But too much daytime shut-eye may only make it harder to fall asleep at night.

• Stick to a schedule. Tough as it may be, encourage your adolescent to go to bed and get up at the same time every day — even on weekends. Prioritize extracurricular activities and curb late-night social time as needed. If your adolescent has a job, limit working hours to no more than 16 to 20 hours a week.

• Sleeping pills and other medications generally aren't recommended for adolescents.

In some cases, excessive daytime sleepiness can be a sign of something more than a problem with your adolescent's internal clock. Other problems can include:

• Depression. Sleeping too much or too little is a common sign of depression.

• Insomnia or biological clock disturbance. If your adolescent has trouble falling asleep or staying asleep, he or she is likely to struggle with daytime sleepiness.

• Medication side effects. Many medications — including over-the-counter cold and allergy medications and prescription medications to treat depression and attention-deficit/hyperactivity disorder — can affect sleep.

• Narcolepsy. Sudden daytime sleep, usually for only short periods of time, can be a sign of narcolepsy. Narcoleptic episodes can occur at any time — even in the middle of a conversation. Sudden attacks of muscle weakness in response to emotions such as laughter, anger or surprise are possible, too.

• Obstructive sleep apnea. When throat muscles fall slack during sleep, they stop air from moving freely through the nose and windpipe. This can interfere with breathing and disrupt sleep.

• Restless legs syndrome. This condition causes a "creepy" sensation in the legs and an irresistible urge to move the legs, usually shortly after going to bed. The discomfort and movement can interrupt sleep.

==> My Out-of-Control Teen: Help for Parents with Strong-Willed Teenagers

I just added your blog site to my blogroll, I pray you would give some thought to doing the same.