"I am at wits end about my teenage daughter..." 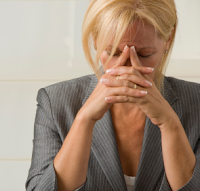 Dear Mr. Hutten: I am at wits end about my teenage daughter. I just recently found a notebook that her and her girlfriend have been passing back and forth. She wrote to her girlfriend that a boy she likes asked her for a blowjob do you think he is using me. She is only 12 yrs old she will be 13 in May. I have talked to her continuously regarding that oral sex is sex and all the STD's she could possibly get from this behavior. She said she didn't do anything swears up and down she didn't but the rumor spread around school and also came back to me. Please help me on how to deal with this problem. I can't sleep at night thinking she could possibly do something like this. All the conversations I have had with her thinking I could prevent that she would not get involved with this behavior hasn't worked. I can't trust her anymore. I don't let her run the streets like other children do, I just can't believe this is happening, I am so afraid of what the future is going to bring. Please help me to handle this problem correctly. I appreciate anything you could do for me. Thank You, D.

The topic of sexuality and adolescents often makes mothers and adolescents uncomfortable. It can be difficult for some mothers to even broach the subject of sexuality, and even more difficult should the parent suspect their child is sexually promiscuous. Few mothers want to confront the issues of sexual promiscuity or inappropriate sexual behavior in their children, yet avoiding such behavioral problems can be as risky as the behaviors themselves. Not only does sexual promiscuity cause serious health risks to your child, it can damage self-esteem and the emotional health of a developing adolescent.

Adolescents often partake in risk-taking behaviors. This seems to be a common theme among adolescents, but it can become a serious issue in troubled adolescents. Sex may become an outlet for a struggling teen's frustrations, much in the same way drugs and alcohol serve as an outlet. In this way, sex becomes a drug, a way to escape feelings and emotional confusion. However, as with any drug, there is a backlash. Any teenager who is acting out sexually will begin to feel a diminished sense of value and self-esteem.

In some cases, sex can be used as a weapon or defense. An adolescent might see promiscuous sex as a way of showing mothers that he or she is "free," an adult, someone who can "do whatever" they want to do. Allowing a young person to continue to see sex in such an emotional immature and self-destructive manner can lead to long-term problems with intimate relationships, as well as the child's physical health.

Mothers can best help their teens from becoming sexually active by maintaining a warm and loving relationship with their children – and letting teens know that they are expected to abstain from sex until marriage.

Mothers who are involved in their children's lives, and who confidently transmit their religious and moral values to their children, have the greatest success in preventing risky and immoral behavior. For this reason, it is more important for adolescents to see real-life examples of people who understand and deal responsibly with their sexual natures.

Morals are not abstractions. Morals have to do with real-life commitments to people and things that have value. Mothers and other influential adults (at school, at church, and in the community) need to show adolescents the difference between devotion and infatuation and help them make the distinction in their own hearts.

The sexualization of girls and mental health problems—

In response to reports by journalists, child advocacy organizations, parents, and psychologists, the American Psychological Association (APA) created a Task Force to consider these issues. The Task Force Report concluded that the sexualization of girls is a broad and increasing problem and is harmful to girls' self-image and healthy development. Sexualization is defined as occurring when a person's value comes only from her/his sexual appeal or behavior, to the exclusion of other characteristics, and when a person is sexually objectified, e.g., made into a thing for another's sexual use. The report states that examples of sexualization are found in all forms of media, and as 'new media' have been created and access to media has become omnipresent, examples have increased.

The APA Task Force Report states that sexualization has negative effects in a variety of domains:

How can parents help their daughters develop healthy self-esteem?

Although the media, peers, and pop culture influence children, parents still hold more sway than they think when it comes to having an impact on a daughter's developing self-esteem. Here's how parents can help:

1. Monitor your own comments about yourself and your daughter.

2. Get dads involved. Girls with active, hardworking dads attend college more often and are more ambitious, more successful in school, more likely to attain careers of their own, less dependent, more self protective, and less likely to date an abusive man.

4. Encourage your daughter to speak her mind.

5. Let girls fail - which requires letting them try. Helping them all the time or protecting them, especially if done by dad, can translate into a girl feeling incapable or incompetent.

7. Get girls involved with sports/physical activity, it can reduce their risk of chronic diseases. Female athletes do better academically and have lower school drop-out rates than non-athletes. Regular physical activity can enhance girls' mental health, reduce symptoms of stress and depression, make them feel strong and competent.

8. Watch television, movies, and other media with your daughters and sons. Discuss how images of girls are portrayed.

9. Counteract advertisers who take advantage of the typical anxieties and self-doubts of pre-teen and teenage girls by making them feel they need their product to feel "cool." To sensitize them to this trend and to highlight the effect that ads can have on people, discuss the following questions (adapted from the Media Awareness Network) with children:

It is within the family that a girl first develops a sense of who she is and who she wants to become. Parents armed with knowledge can create a psychological climate that will enable each girl to achieve her full potential. Parents can help their daughters avoid developing, or overcome, negative feelings about themselves and grow into strong, self-confident women.