Pulling Weeds as a Form of Aversion Therapy

"I’m raising my grandson who was suspended from school (year 8) for the past week for swearing at a teacher. He was told that he would get 2 weeks next time. He now has the attitude that if I send him back to school he will see to it that he is sent home again and again. I did do the 3 days behaviour in his room and I do notice that he is getting bored, but he seems to have the attitude that boredom is better then school. So now what?!" 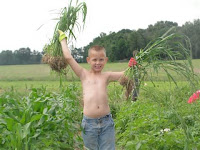 So he just hangs-out in his room? How difficult is that? Not very!

In this situation, “staying at home” must be more uncomfortable to him than “going to school.” Rather than telling you what you “should” do here, I’ll just tell you what I did:

When my son (now 32) got suspended from school (at age 9) for back-talking a teacher, I made life at home pretty damn miserable for him (just short of ‘pure hell’):

Was he bored? Nope. Tired? YES!

Now... I won’t say he was excited about getting back to school after the suspension, but – let’s put it this way – he preferred sitting at a desk at school rather than picking weeds and scrubbing oils spots off the driveway at home (a little dose of aversion therapy).

It didn't matter to me whether or not he was doing the chores perfectly ...I had bigger fish to fry. The only thing that mattered was that he was spending a lot of time and energy performing tasks he had no interest in.

He never got suspended again (although he thought about it a few times). Was this luck? I don’t think so.

Ih wow, mine wint do anything because everything is "boaring" so unless I'm spending money on her, she wont do anything. Its mini war after mini war at this house, 90% of the time no one wants to talk to her because shes so nasty.

This is what I am dealing with, with my teen. She is defiant and can be so mean other times she is a great kid. But nothing else seems to.matter these days. Im starting to feel like she feels better when she is fighting with people. Im at a loss of what to do. She has the worst I dont care attitude.