I was wanting to ask you how we best handle A___'s outbursts of rage and verbal abuse when she is frustrated. She asks for help with a problem (i.e., wrapping a parcel to set up a shop for a game this morning, then refuses to listen to the help to get the parcel wrapped, then starts to scream and abuse us for offering "stupid" help then rips up the paper, throws the sticky tape on the floor and storms off screaming and slamming the doors as she goes). She is then not able to calm herself down for ages and sulks like a 2 year old and this scenario goes on almost every time she can't do something and asks for help. We encourage her and try to get her to do it herself and praise her (on the extremely rare occasion she listens and succeeds) but this just goes on and on and can ruin a whole weekend as it has done yesterday and today. 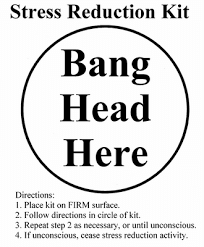 What you’re dealing with here is “low-frustration tolerance” (a classic symptom of an over-indulged child). Your daughter gets frustrated …then you seem to get frustrated at her for being frustrated. We all want life to be organized according to our preferences. This surely makes sense! What then is the problem? Unfortunately, we often go beyond just wanting - we believe that things must be our way. This reflects a human tendency called low frustration-tolerance.

I suspect that this tendency is one of the most common, underlying causes of distress in human beings. Paradoxically, it seems to be the one of which people are most unconscious! Low frustration-tolerance arises from believing that frustration is unbearable, and therefore must be avoided at all costs.

Low frustration-tolerance is caused by catastrophizing about being frustrated and demanding that it not happen. It is based on beliefs like:

Low frustration-tolerance is closely related to low discomfort-tolerance, which arises from catastrophizing about discomfort (including the discomfort of negative emotions), with an internal demand that it be avoided. The two types are similar and closely related. Frustration is uncomfortable, and discomfort is frustrating. Often one expression is used to refer to both types.

Low frustration-tolerance arises from demands that things be as we want, usually coupled with awfulizing and discomfort-intolerance when this does not happen.
==> My Out-of-Control Teen: Help for Parents

High frustration-tolerance means accepting the reality of frustration and keeping its "badness" in perspective. To accept frustration is to acknowledge that, while you may dislike it, there is no Law of the Universe that says you ‘should’ be exempt from it (though you may prefer to be). You expect to experience appropriate negative emotions like annoyance and disappointment. But you avoid exaggerating these emotions (by telling yourself you can’t stand them) into depression, hostile anger, hurt, or self-pity.

· “Because I can’t stand being frustrated, I must avoid it at all costs.”
· “I can’t stand it when people don’t act as they should.”
· “It is awful and intolerable to be frustrated from having things the way I want.”
· “My circumstances have to be right for life to be tolerable.”

· “I don’t like it, but I can survive it - and survive better when I don’t lose my cool over it.”
· “If I tell myself that frustration is awful, I’ll only set myself up to get anxious when I think it's coming - and bitter and twisted when it does happen.”
· “It is disappointing when things aren’t the way I’d like them to be, but it is not awful — and I can stand less than the ideal.”
· “Total avoidance would mean a very restricted life. Though I don’t like frustration, I can tolerate it.”

How to raise your tolerance for frustration:


Parent's Comment: "I guess we could all do with looking at ourselves and trying to keep our own frustration levels a little lower. Your emails are a great leveler and very informative. My husband says you deserve a knighthood for the work you do and the depth and completeness of your email replies! Thanks again until the next time...!"