Dealing with Teens Who Frequently Drop the "F" Bomb 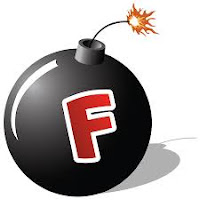 Mark, We are doing the consequence thing (for car use, computer, phone, being able to go out etc.) and he has not had to be grounded from everything in quite a while. What I would like are some suggestions for when he gets mad (while not on any consequence), and does not like the direction of the conversation/limits he has to adhere to and starts to drop the "f" bomb either in conversation or directed at me.

====> The house rule should be "no using the f___ word." Then if he uses the f___ word at any time, just treat it like you would any other rule violation. See "When You Want Something From Your Kid" {Anger Management Chapter - Online Version of the eBook}.

This behaviour is not related to his lap top but I have started to confiscate it for 24hrs at a time. If he can go without cursing for 24hrs he has earned it back, if not the 24hrs starts over.

It has gotten to the point where we need to deal with it--the curfew is not much of an issue (may be 10 minutes late but the next time out he has to be home earlier), phone use is acceptable as it must be turned off at 11:00pm on school nights and he does (or loses it for 24hrs), and he gives up the car keys at night and uses the car appropriately (going to/from anywhere only with our approval) or loses it for 24hrs or more. He has not gotten violent in over a month. He continues to push, push, push with the limits, however and we do try to stay strong and unemotional. We are now ready to deal with the smaller issues but need a consequence that is meaningful (him wanting to change behavior) yet connected to the problem. Any ideas?

===> If you want to get real creative, rather than taking the laptop away (which is somewhat unrelated to cussing), you can try the following:

If he loses all 15 bucks - that's fine. If he uses the F___ word 16 times in a week, he is still only charged $15.00. Unlike the consequence of having computer privileges taken away, once he loses a dollar, that dollar is gone forever.

Fully expect for him to 'burn up' all 15 bucks for a couple of weeks until he gets a grip on how this system works. Allow him to make the choice to cuss, then simply charge the $1.00 fee each time (with your poker face).

Also, what "chore" every day is acceptable? Can it be something really small like to putting clothes in the hamper instead of thrown on the floor, putting his clean clothes away, or should it be something more? I am OK with the smaller stuff for now.

Yes, I strive to tell him something positive everyday and "I love you. His PO feels we (family) are all making progress but when you're living in it everyday it sure may not feel like it.


==> My Out-of-Control Teen: Help for Parents of Defiant Teenagers

==> More information on how to deal with chronic teenage rebellion...