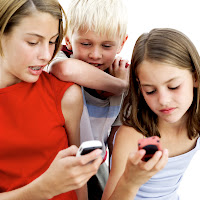 Unlike other parenting problems, most of us can't really think back to our own childhood to see how our moms and dads handled this issue. After all, cell phones weren't around when most of us were children.

For many moms and dads, a cell phone just seems like something else that their children will nag them about getting, such as an iPod, Xbox, Wii, or new laptop.

Teens and preteens likely see the cell phone issue differently, imagining that getting a cell phone is a step towards independence and a status symbol among their friends.

One very good reason to get your children a cell phone is that it lets you stay in touch with them at almost all times. In addition to being practical, like when a gymnastics lesson or baseball practice lets out early, having a cell phone can help you easily get in touch with your children in case of an emergency. This extra sense of security and safety that a cell phone providers is probably the key reason that moms and dads should even consider getting their younger kids a cell phone.

And in the case of a real tragedy, like a school shooting or terrorist attack, a cell phone can be your only lifeline to your children.

A cell phone can also be an important way to keep in touch with your older teen, especially if they are driving. And if you get a phone with GPS, a cell phone can help you figure out where your teen is at all times.

Security, safety, and convenience are really the main reasons to consider getting your youngster a cell phone, but other weaker arguments might include that a cell phone can:

• teach your children to be responsible as they learn to care for their phone, avoid losing it, and stay within their cell phone plan's voice, data, and texting minutes
• help your children keep up with friends who have cell phones, although giving in to peer pressure isn't really a positive thing

Although the added safety a cell phone offers is nice, consider that most of the younger children that cell phone companies are targeting, especially preteens between the ages of 8 and 11 or 12, shouldn't really be alone anyway. In most situations, your youngster will be able to use a regular phone or the cell phone of whichever adult is supervising them.

Other good reasons to delay getting a cell phone until your children are a little older, leaving out a discussion of possible and controversial health hazards from radiation, can include:

Cell phones can be expensive. Once you get away from a basic plan, you can be hit with extra charges for going over your minutes, sending text messages, buying ringtones, and using the internet. Even with fees for text messages as low as 10 cents each, that can quickly add up if you have an average kid that sends 10 to 20 text messages a day. And that doesn't include the cost of a replacement phone if your children lose their phone.

Other charges can include:

Although the increased independence that a cell phone might offer a youngster can be good, it can also be a negative thing. Consider that with a cell phone, your youngster will simply have another way to communicate with the outside world that you will have little supervision over.

A cell phone also gives the outside world another way to communicate with your youngster. A sex offender, as they do in chat rooms, could hide behind the anonymity of text messaging and 'talk' to your youngster.

And keep in mind that most of today's cell phones offer almost complete internet access, with web browsing, email, chat, and instant messaging, that is much harder to filter and control as compared to your home computer.

Cell phones also put your youngster at risk for getting in trouble for:

Depending on who you ask, cell phone for children might be considered:

Other things to consider when getting your younger youngster a cell phone include:

• a pre-paid plan with a limited number of minutes so that you won't be faced with a lot of extra charges
• get one with a GPS tracker so that you can easily find your youngster when you need to (this is probably the only reason that I would even consider getting a cell phone for my children right now)
• have a discussion of some of the more serious cell phone issues, such as the dangers of driving while talking on a cell phone, cyber-bullying, cell phone etiquette, and following rules for cell phone use at school
• only giving the phone to your youngster when he really needs it, like during a trip to the mall or other time when he might not be near a regular phone
• the ability to put strict limits on what the phone can do, including being able to turn off web access and text messaging. Some phone also let you limit who can call the phone and who your youngster can call using the cell phone.

Currently, the ideal phone for younger children that includes many of these guidelines is from Firefly Wireless. It includes prepaid minutes, a PIN encoded phone book, and call screening, so that you can restrict calls to and from the phone. And it doesn't include internet access. The only downsides are that it doesn't include GPS, its coverage area is somewhat limited, and at 25 cents per minute for domestic calls, it is a little more expensive than a plan that you might get from a bigger carrier, such as AT&T, Verizon, or Sprint.